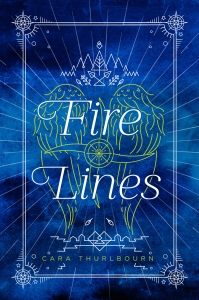 When your blood line awakens, how do you choose between family and freedom?
Émi’s father used to weave beautiful tales of life beyond the wall, but she never
knew if they were true. Now, her father is gone and Émi has been banished to the
Red Quarter, where she toils to support herself and her mother – obeying the
rules, hiding secrets and suffering the cruelties of the council’s ruthless Cadets.
But when Émi turns seventeen, sparks fly – literally. Her blood line surges into
life and she realises she has a talent for magick… a talent that could get her killed.
Émi makes her escape, beyond the wall and away from everything she’s ever
known. In a world of watchers, elephant riders and sorcery, she must discover the
truth about who she really is. But can the new Émi live up to her destiny?

Look at that cover art. I know, I know, you shouldn’t judge a book by it’s cover, but this cover is beautiful.

I was hooked with Émi’s story from the start. The dystopian setting of the Quarters is perfect and we are soon introduced to the fear felt by the inhabitants in the Red Quarter (where Émi lives) as the cadets raid their homes looking for traitors and signs of magick. Émi used to live in the Green Quarter until her father was found to be a traitor and we get small glimpses of the differences in her life before, and as it is now. I would have liked to know more of the differences between the Quarters. I also loved the undercurrent of rebellion that we get a glimpse of when Émi’s magick is revealed and she hides with her friends, and hope that we will see more of this in the sequel. This setting is reminiscent of the factions in Divergent, the districts in The Hunger Games, and the division of colours in Japer Fforde’s Shades of Grey, and I’d recommend this to anyone who considers themselves a fan of these novels.

When Émi discovers signs of her own magick, she realises the increased danger she is in and her world is turned upside down. Is anyone who she thought they were? Émi’s story is one of a journey, typical of most fantasy novels, but with some wonderful twists I didn’t see coming. There are some beautifully written and emotional scenes, especially when we come across the elephants. The characters are interesting: Tdsam particualrly held my interest for a lot of the novel. Fire Lines ended leaving me wanting the sequel.

If you sign up to the author’s mailing list, you can win a goodie bag, including a signed copy of the book, postcards, a bookmark, a badge and a handmade version of Émi’s necklace.