Hello everybody. Today I have got a Q and A about The Unlucky Eleven by Phil Earle. This is a book about a real life football team and a real life boy called Stanley who is Phil’s child. There is some more writing here about Stanley and his dad Phil, and about the books that Phil has written. I liked reading about this because I like superheroes and football too, and I really liked the photo of Stanley dressed as Captain America with Thor’s hammer mjolnir and Batman’s mask. I think I am going to try out this costume at home. 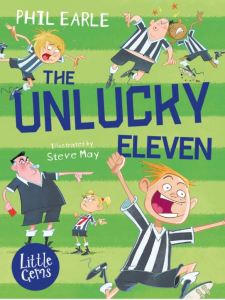 Here are some questions that I asked to the author of The Unlucky Eleven and his answers.

1. Why did you want to write about football?
I wanted to write about footie for a couple of reasons: it’s long been my passion, but also, my son, who the book is about, is football barmy right now, so I thought we could read it together!
2. Why did you choose a black and white football kit like Newcastle United?
The Saints play in black and white because they are based on my son Stanley’s REAL team….
3. Who is your favourite football team?
I support the greatest football team the world has ever seen…HULL CITY. COME ON YOU TIGERS!!!
Noooooooooo! Newcastle are the best team ever – S.
4. Who was your favourite character and why? Mine was Stanley.
I’m so pleased you like Stanley (as he’s my son!). All the players are based on REAL players in their team, and I’m a big fan of Hettie. she’s the only girl in their squad, but she is pretty awesome. A great player!
5. Are you going to write any more books about football? If not what are you going to write about next?

3 thoughts on “Books with the Boy: Q& A About The Unlucky Eleven by Phil Earle”