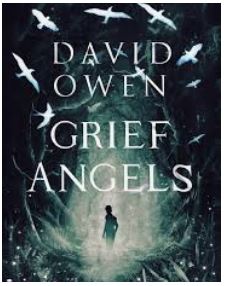 “NARRATOR: They blatantly were. Thanks, Brain. That pessimistic voice is my depression talking. In fact, that’s the biggest sign that our friendship has changed: I still haven’t told them about my depression diagnosis.”

Grief Angels is the story of two boys: Duncan and Owen. Duncan suffers from depression and is going through some difficult times with his friendship group. They are growing apart as they develop different interests and different levels of sexual maturity leading to jealousy and competition that is driving a wedge between them. Owen is struggling with his feelings after the death of his father. He’s sick of being told how to grieve and how to think about his father, because his memories and those of the people around him aren’t the same and he is struggling to reconcile this.

I have been excited for Grief Angels since I first heard about it. I devoured the YALC sampler and was desperate for more. I always enjoy David’s work, so I was definitely going to pick up this book, even before I knew it was taking on two of my favourite themes: grief and mental illness. I expected this book to be brilliantly written, like all of David’s books, and to have some of the themes I have come to associate with his work: characters facing difficult situations, feeling isolated from others, and being forced to examine their feelings. This book has all of these things and much, much more. It is something really special.

Owen has creepy, recurring dreams that progress to a kind of vision / experience that only he can see and be part of. I don’t know how to explain this, so just agree with me and let’s move on, okay? There are angels and he’s becoming one of them. It is a way for him to work through his grief and the complicated feelings he is having, but I loved that this was done with a touch of magical realism. We see how Owen’s grieving makes him different to those around him, and how it consumes his life even as he is trying to get on with other things. The magical world is captivating: I loved the people, the landscape and the concept that somehow Owen is being tested as he walks through the world of Death.

Meanwhile Duncan, is dealing with depression and friendship drama. He is growing apart from his friends, they’re not as close as they used to be and he is starting to find some of their behaviour problematic, but he doesn’t want to lose his lifelong pals so he sort of goes along with it whilst inwardly panicking and berating himself for his part in it. He is looking for ways to bring their group back together (like getting them involved in his sister’s talent show), but is also reluctant to share his diagnosis with hem, and accepts that they are growing apart. David has written this perfectly. I felt Duncan opening up about his struggle with depression, his diagnosis and his treatment in my soul. It was refreshing to see a character (particularly a teenage boy) be so open about this.

The two boys are thrown together by their parents in that awkward way parents have of being like: we both have children, let us force them to talk whilst we have tea. But they bond and become close friends quite quickly. They have a lot in common and they’re both more willing to be open with each other than with the other people in their lives.

For me, one of the key things about Grief Angels is that it shows boys dealing with emotions (grief, loss of friendships, growing up, mental health difficulties etc). There are not enough of these books in the world. As the mother of a growing boy, this is a thing I am often aware of, and whilst boys can absolutely read books with female main characters, teen boys particularly need to see themselves in books: they need to be able to see characters like Owen and Duncan who show them that it’s okay to feel your feelings, and there there are alternatives to bottling up your worries and the toxic masculinity narrative they are often subjected to. I shall climb down off my soap box now and get back to writing about how great this book is.
Grief Angels is one of the most beautifully written books I have ever read. You know when you read a book and there’s a line or a paragraph that is so breathtaking that you have to put it down to just sit and reflect on what you read? That. This happened to me so many times reading this book. The descriptions are gorgeous, the dual narrative captures the boys very different voices perfectly, it is witty and made me laugh aloud a lot, and it has one the the best visions of the afterlife I’ve come across.
This book floored me. I was prepared for it to be emotional, after all it tackles grief and mental health, but I wasn’t prepared for it to make me cry or for it to worm it’s way into my little shrivelled brick heart. It has amazing characters, brilliant friendships, tackles important issues and has just the perfect amount of drama to keep me turning the pages. I didn’t want it to be over. I could have stayed in this world with these characters forever.