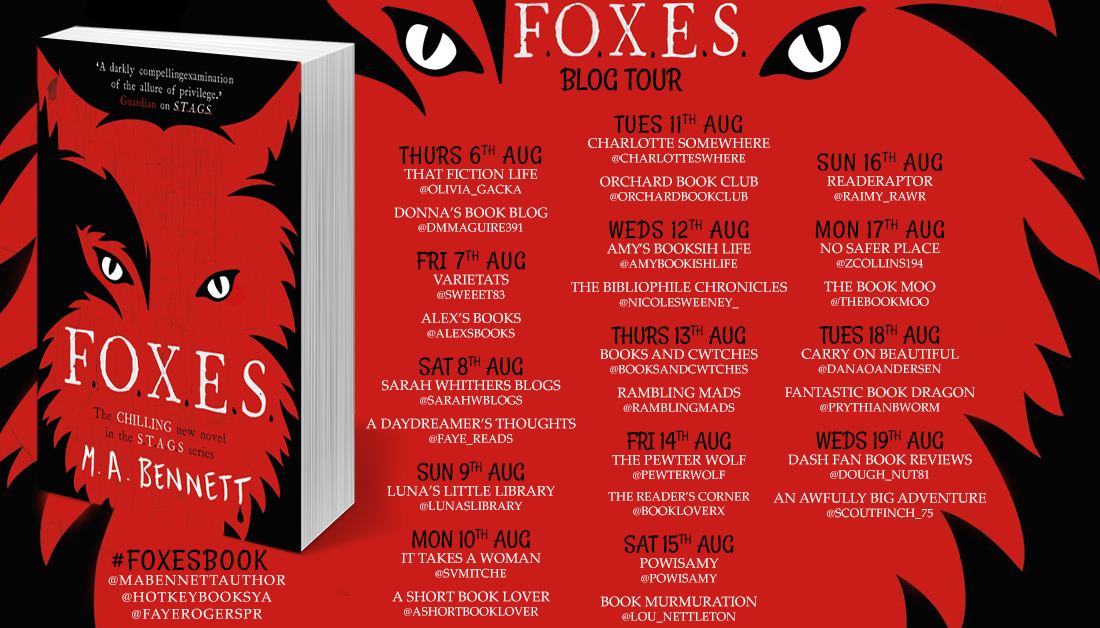 Today is my spot on the blog tour for F.O.X.E.S by M.A.Bennett.

Greer has just recovered from her terrifying experience during the STAGS play. Was she really put on trial by the sinister Dark Order of the Grand Stag? Or was it purely her overheated imagination? The imprint of an ‘M’ for murderer that has appeared on her thumb, though, is puzzling but incomplete evidence . . .

Meanwhile Ty is staying on at Longcross Manor and Greer, Nel and Shafeen are increasingly worried for her safety. When Ty sends a cryptic message directing them to Cumberland Place, the de Warlencourts’ palatial home in London, they decide to risk a visit. There they meet Henry’s grieving parents, Rollo and Caro. Rollo is arrogant, entitled and not overly grieving. Caro, however, while superficially charming, is clearly pushed to the brink of madness by Henry’s death, insisting that Henry is still alive. Which is clearly impossible . . . but Greer has her own troubling doubts about Henry’s death which make it hard to dismiss Caro completely . . .

Can Greer, Shafeen and Nel work out what Rollo de Warlencourt is planning for his deadly Boxing Day Hunt at Longcross in time to save Ty – who has now gone silent? Or will history horribly repeat itself?

A thrilling, richly complex instalment in the STAGS series.

I am a huge fan of M.A. Bennett’s work, so I was thrilled when I was asked to be part of the blog tour for the third book in the S.T.A.G.S. series. I had no idea how M.A. was going to follow on from the phenomenal ending of D.O.G.S and write another book just as gripping and intriguing, but she has.

In the opening chapter, we get a brief reminder of what happened in the last book with Greer reflecting on her “trial”, which is really helpful for people like me who read a lot of books and have memories like sieves.

Greer is struggling with this; Shefeen and Nel are trying to help her through it, but not everyone around Greer believes that the trial happened, or that Henry is still alive. At times, I really questioned Greer’s version of events too, and that’s one of the things I really love about these books; they make me question everything and everyone.

F.O.X.E.S. takes on the topic of privilege and power in a much bigger way than its predecessors, and I found this fascinating. It is so brilliantly written, with the debate on banning fox hunting and the Boxing Day hunt at the centre of it, which gave me shivers and threw me right back to the hunting scenes in S.T.A.G.S as well as making me extremely worried for a particular character. I also loved how Greer, Nel, and Shafeen are forced to face up to the privileges and prejudices they have, and the way that they are complicit in the actions of those they seem set against because of this.

This book calls on a lot of history and there is a lot of information in it, but it never feels like too much; it was the right amount to fuel my curiosity whilst also letting me believe the answers were just at the edge of my brain (spoiler: they weren’t, I was completely shocked by every twist and reveal). I love history and even more so when it is expertly woven into a story as clever as this one.

I wasn’t at all sure how M.A. could make another book in this series work with Greer constantly intent on getting herself into near death situations with the de Warlencourts, but this works well. It is my favourite in the series so far. It absolutely knocked my socks off, and is so cleverly set up for the next book in the series, which I really cannot wait to get my hands on.

M. A. BENNETT is a history graduate of Oxford University and the University of Venice, where she specialised in the study of Shakespeare’s plays as a historical source. Her first YA novel, S.T.A.G.S., was published in 2017 and was shortlisted for the YA BOOK PRIZE 2018, winning various awards such as the Warwickshire Secondary Book Award 2019 and the Sussex Coast Schools Amazing Book Award 2019, both voted by students, and won the Great Reads ‘Most Read’ 2018 Senior Award.